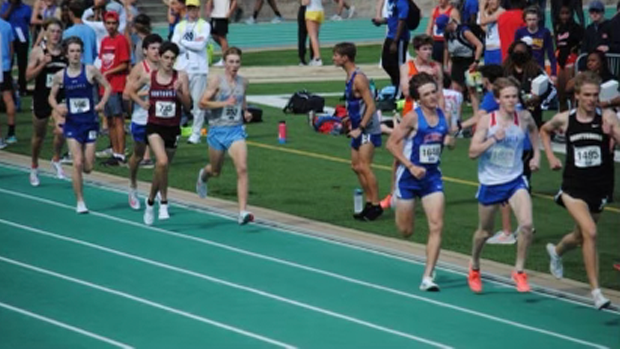 On a crisp and sunny afternoon in Mountain Brook, Alabama, seventy-five of the southeast's finest chased after a PR in the men's one-mile race. The gun went off with a staggering field of ten sub-4:20 runners, and another eighteen men under 4:30. While there was a large number of talented athletes, all eyes were on the fourth heat of this men's mile which included eight NCAA D1 and D2 commits, 6 individual State Champions, and one National Champion.

These men toed the line knowing the pace would be blistering -- and it was.

Just under sixty-one seconds after the gun went off the men had covered the first 409 meters.  The race got off to a flying start and eventually, a dominant chase pack of five or six runners had formed. This pack was led by none other than Vestavia Hills Ethan Strand. (Strand has quickly become one of the nation's top competitors and recently won the mile event at the Adidas National Championships. Strand has committed to the University of North Carolina)

As the second lap unfolded, Junior Will Pinson of Huntsville High made a daring move taking the lead for a few hundred meters. Pinson's lead would not last as Auburn University commit Cooper Atkins took the lead just before halfway, bringing the pack through a screeching 2:06 split at 809 meters. Atkins would go on to lead the entire third lap as the chase pack began to expand their commanding lead and came through the 1209 meter mark in 3:09. During this third lap Sophomore phenom, Mac Conwell surged and placed himself in third behind Atkins and Strand. As Conwell surged, he pulled along Gabe Scales (an Ole Miss commit) and Brady Barton (University of Alabama Commit) to round out the top five going into the final lap.

Strand, Atkins, and Conwell took the final lap by storm and closed hard. Strand would end up passing Atkins in the final 200 meters of the race and closed the race confidently. Instinctively, the National Champion finished this race with a sporty sub-58 second bell lap. He would not only shatter a meet record from 1977 (Randy Stephens; 4:09.25), but he would also run the current U.S. number three time AND the second-fastest mile in Alabama high school history. Strands 4:07.90 is one of the fastest miles run by a high schooler on Alabama soil EVER.

Coming in just behind Strand was four-time State Champion Cooper Atkins in 4:10.79 to secure second place. Atkins was quickly followed by a promising sophomore Mac Conwell in 4:11.72, which is a U.S. number one time for sophomores this year. Conwell is a bright prospect for the class of 2023. Rounding out the top five were two future SEC runners Brady Barton (4:12.40) and Gabe Scales (4:14.81). Barton is a two-time Alabama State Champion, and Scales is a decorated veteran senior who just recently won the Mobile Challenge of Champions 800 meter race.

There were seven other runners that ran 4:20 or better on this record-breaking day, including Chelsea High's breakout junior sensation Miles Brush. The 6A Alabama Cross-Country State Champion clocked a 4:16.78 for a 14-second official personal record and a sixth-place finish in this stacked field. Numbers do not lie, being only a Junior, Brush is an impressive recruit.

Coming in seventh place was the second of the Atkins brothers, Benson Atkins, who ran a speedy time of 4:17.66. Benson is also an Auburn University commit. Eighth place was yet another great athlete from the class of 2023, Alex Leath, who has already run 1:52.72 over 800 meters. Leath had a strong eight-plus second PR at 4:18.25. Ninth place was junior Ryan Lovelace of Cleveland High in Tennessee who ran his first-ever sub-4:20 performance in 4:18.86. And rounding out the top ten performances of this men's mile is Stone Smith who also represents the class of 2023. Smith ran a time of 4:19.68 and was the third of the three sophomores represented in the top ten.

All-in-all this was a huge race and weekend for the state of Alabama, as many proved to be among the best in the nation. Strand stole the show this Saturday afternoon at the Mountain Brook Invitational of Alabama, and many others ran huge personal records.

The 2021 Mountain Brook Men's One Mile Race will go down as being the fastest and deepest race in Alabama history to date.