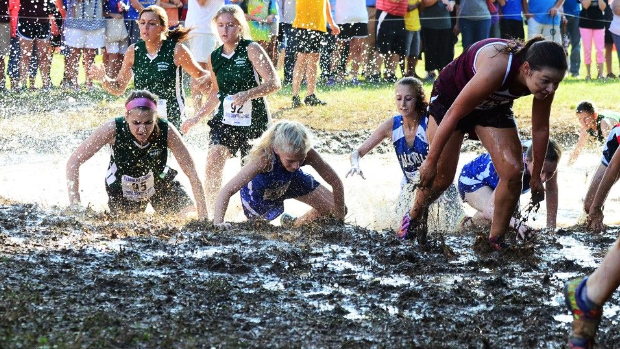 Cross country is a unique sport in the way it challenges distance runners. We take distance runners and expect them to travel over various types of terrain as quickly as possible while working as a team.  The physical demands placed upon a distance runner in a cross country race are different because the terrain (course) can be like another opponent trying to break the runner.  That is how cross country was intended to be and how some people think it should be today.  It seems that lately, runners seem to favor courses which are fast, flat and easy to navigate.  Isn't that what track is for?  Everyone wants to post fast times and look good in the rankings on Milesplit, who doesn't?  While those rankings are an invaluable resource and a good way to gauge a team's depth and ability they do not often reveal the toughness of a team.  While everyone can appreciate a good fast course, we are slowly shifting away from the heart and soul of what cross country use to be.  Courses once challenged a runner's physical and mental toughness as much as their speed.  We expect our courses to be well-groomed with clear trails, cut grass or hard packed gravel.  We seem to have gotten away from expecting rough, natural terrain to expect the smoothness of golf courses.  Golf courses are not easy courses by any stretch of the imagination, but hills are usually the only real challenge in a golf course race.  Hills are tough, but is a golf course real-cross country?  Is a gravel-packed trail considered real cross country?  Does a race need a creek to cross or a natural obstacle to jump in order to make the purist of the sport content?  Is our sport becoming more about running fast times or being able to tough it out through a course?

In order to understand where we are in the sport, it is important to consider where it all began.  The origin of cross country running as a competitive sport comes from England in the early 19th century.  While it stems from a popular game called, "Hare and Hounds" or "The Paper Chase" it was not an official, formal competition (race) until 1837 when "The "Crick Run" was organized and held at The Rugby School.  One difference between "The Crick Run" and "Paper Chase" or the "Hare and Hounds" game is the course.  The "course" for the game was random, set by the lead runners, called "Hares", by leaving pieces of paper for the "pack" of "hounds" to follow.  The course for "The Crick Run" was not random- it was a planned course, laid out in advance over open country.  In either case, the course was intended to be difficult and challenging.  These races were held in any condition over any obstacle; hills, fences, streams, thorny hedges, in ice, hail, snow, freezing temperatures or heat over 100 degrees.  It was all part of the event.  The course was one crucial element to an early cross country race and everyone expected it to be difficult.  The swiftest runners had to also be tough to win these early races.  It still takes both speed and toughness to win in cross country but the courses do not seem to demand as much courage as they once did. 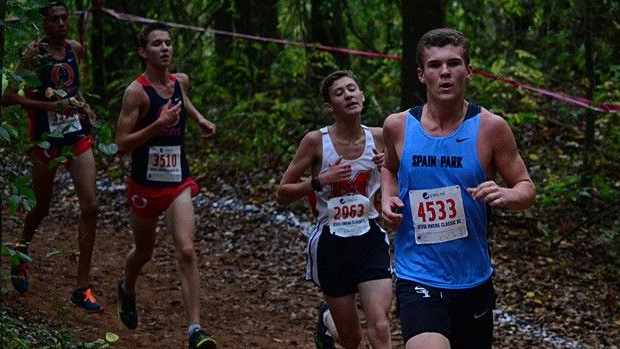 Today, I recognize there are many different types of trail races, distance runs and endurance races out there which all sound a lot like the "Crick Run".  People wear shirts like badges of honor from these races and plaster stickers on their cars to prove they are tough enough for those runs.  There is nothing wrong with that- you have earned those- show the world.  It seems to me that this type of toughness is slowly fading from our sport.  Actual cross country races with natural obstacles seem to be more of a novelty or a "fun" race for teams.  If the state meet had a creek to cross or other natural obstacles I guarantee those types of races would become more the norm for everyone.  There needs to be a balance of everything in a good cross country race and people should expect variety from the course.  Runners need to be prepared to have their physical and mental toughness challenged by hills, down trees or rough terrain.  Cross country runners are tough athletes and the course they race should make them tougher.  Obstacles are not something to complain about- they are something to overcome.  In life, people rarely have significant growth when everything goes smoothly.  We become better people by the obstacles we overcome and racing cross country should be no different.

Cross country usually reveals a runner's toughness in a way that the track cannot.  I am not saying distance runners on the track are not tough- I am simply saying that cross country requires a different kind of toughness because of the course.  When the course we have at Spain Park was first being built, I had a parent, who was also an official, criticize the difficulty of our new "cross country" course.  Quite specifically, I was told that some of the turns were too sharp for runners to navigate smoothly, some of the sections of the trail were not even enough, some of the exposed roots needed to be removed or spray painted brightly so the runners could easily see them and that the finish line was not within the rules because there was a slight turn in the last 150m or so.  I thought, isn't there a turn in the last 150m on the track?  We discussed/debated whether or not it was a good thing that the hills were tough and forced the runners out of a rhythm.  Our hills were intended to force the runners to change gears.  This was a long time ago and the debate continues today about how "challenging" a course should be.  In no way should a course be unsafe, but cross country is intended to be over natural terrain.  Roots, hills and sometimes creeks are a part of the "country" the runners are supposed to "cross".  How quickly can you cross  that type of country is an entirely different display of toughness. 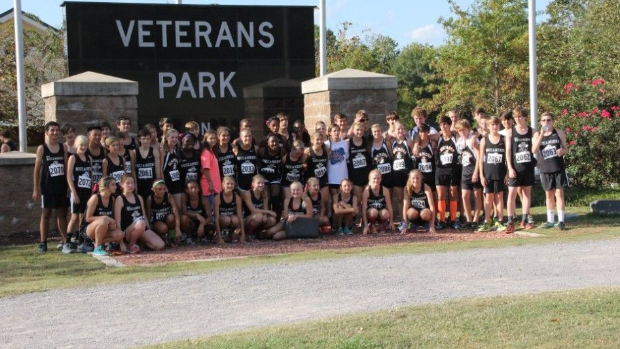 The 2014 Simmons Middle School team poses on the Veterans Park Course for the Hoover Middle School Championship.  Veterans Park has the largest hill of any XC course in the state.  It has been home to Great American and NXN South in the past. (Photo Credit - Diana Knight)

There is no debate- our cross country course is challenging and you are unlikely to set your PR on our course and that is okay.  It is sad that a lot of people avoid courses where they will not be able to run fast.  Others schedule tough courses intentionally to test their team's toughness.  Obviously, the best teams must be fast and tough with an ability to navigate their way swiftly and safely to the finish line.  At times, cross country courses should demand the runner's attention to footing and challenge his or her courage and, at other times, allow them to run freely. Runners should expect the course to be safe, but let's be clear, the possibility of stepping on a root does not make a course unsafe.  Being forced around trees and through narrow passes or turns is all part of the strategy and should not deter people from any race where the runner must fight for their position.  Just because there are trees and not eight lanes of free space to maneuver does not mean a course is dangerous.  Indoor races at the old barn in Priceville were far more treacherous than the fiercest cross country course.   Cross country, by definition, means there will be some natural obstacle to overcome so everyone involved should expect it.   Being able to run quickly over tough terrain is the object of a cross country race and athletes, parents and coaches should not be surprised when a course presents unusual challenges.  Finishing first in a cross country race is not just a test one's speed- it is a test of one's courage to use their ability when obstacles are present.  Every cross country runner knows that when they set a course PR on a tough course that it is as important as their fastest PR.  Both PR's reveal something invaluable about the ability of the runner and the fighting spirit in all cross country runners.

Like people who raced "The Crick Run" almost 180 years ago, all cross country runners should understand that their courage will be tested as much as their ability in any race.  Cross country athletes should not be too concerned with their times on a given course because they know it is all about toughness.  College coaches are usually not too concerned with cross country times because they understand the variation from course to course.  They often do not use cross country times for scholarship standards for that very reason.  However, they all know whether or not your toughness was challenged based on the courses you raced.  Running tough and overcoming courses is more relevant than your PR's in those instances.  Your PR's come from your track times and your toughness is revealed by your experience racing cross country.  May your courage be tested this cross country season and may the courses you race reveal your toughness.