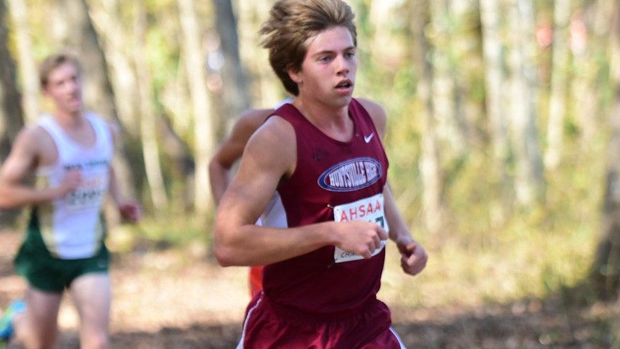 The Huntsville High School Boys team look to make a run at the 7A Title again this year.  We spoke with Asst Coach Blake Borden about how the team is shaping up this summer.

How many years have you been coaching high school cross country (and at your current school)?
This will be my third, all at Huntsville High.
What do you attribute as the main reasons for the success of your program?
We're not there yet, but what has allowed the successes the team has experienced so far: Culture and consistency. The buy in really started two years ago with seniors like Andrew Dodson & Peter Toland leading the way. From that point forward, the kids have set the goals for the team and the coaches have simply done our best to help them get there. It's important to point out Coach Myles Scarano's impact as an integral part of the process over the last two years, and Coach Stephen Baker joining the team this summer has helped further promote what has already been established.
What would be the best way to describe your style and philosophy of coaching and working with high school runners?
Most importantly, show the kids you care first and foremost. Get to know them and their interests. They'll care more and in turn work harder if you go that extra mile as their coach. Furthermore, mindset matters. I was a psychology major for undergrad so I focus a lot on the mind and motivation. I have high, but appropriate, expectations across the board both in teaching and coaching. Everyone, regardless of ability, is expected to consistently be of high character and work ethic. Try your best to do your best at all times. Earned>entitled.
What are your core beliefs in your training plan and workouts for your cross country squads?
The Long Run is critical. Aerobic development in general is key, but also never getting away from developing the athlete as a whole. And of course, teaching and encouraging pack mentality.
How many runners do you return from your top 7 from a year ago?
4 of the top 7 based on last year's times, but our philosophy is that last year's PRs don't really mean much for this season.
Who is your projected top 7 heading into the cross country season?
Again, we're not big about promoting pecking orders and projections going into the year, or during the season for that matter, but I will give a shout to the four guys mentioned in question 5 because of the work they've put in this summer and over the last few years. Senior Nick Ceci is back and looking to do big things. A trio of juniors in Keaton Watts, Jacob Cobb, and Ben Steber are excited about the season. Along with them there are several who have been consistent during the summer. It's legitimately going to be a healthy yet interesting team competition for all of the post season spots. I'm excited to encourage that dynamic.
Who are your team captains or leaders and what stands out about them as examples for the rest of their teammates?
We have several leaders this year. We don't really name official captains, the kids just step up into those roles organically regardless of grade level or ability. Examples are set by following instructions, doing what the coaches prescribe, and being positive. One guy who might not show up in the results column regarding race times but helps lead the team in a dynamic way is senior Fred Wiersig, who is also student council president this year.
Who have you been most impressed or surprised with their improvement and/or fitness from their summer training?
I've been very impressed and proud of the commitment to the summer training for a majority of the team, but if I have to pick one guy who has gone above and beyond and stands out, it's sophomore Jackson Nguyen. It's not surprising because he's been putting in the work since early spring but I'm very excited about not only this season for him but his future as a whole.
Any impactful freshmen or transfers to join the team this season?
Will Pinson, freshman. He won't be in a 5k for a while, but I could see him contributing later in the season.
What are the top invitational meets that your team will be attending this season?
We will have the entire squad at both Chickasaw & Jesse Owens this year. We're also going out of state to the Coach Woods Invite in Georgia.
What will be the biggest obstacle or challenge facing your team this season?
Complacency and lack of attention to detail.
What will be the biggest reason why your team is successful this season?
Staying focused on the daily details and routine. Maintenance, sleep, nutrition and consistency in training, so paying attention to the minor details that sometimes fly under the radar.
What is a favorite annual or common pre-season workout or run for your team?
Our run up Bankhead on Monte Sano, and consistent long runs.
What is a favorite annual or common mid-season workout for your team?
The ROHO
What is a favorite annual or common championship season or end-of-season workout for your team?
K or mile repeats
What are your top 3 goals for this year's squad?
1. Continue to trust the process.
2. Focus on winning each day.
3. Be the best team that we can be based on our standards, rather than allow any external factor to measure or determine our success