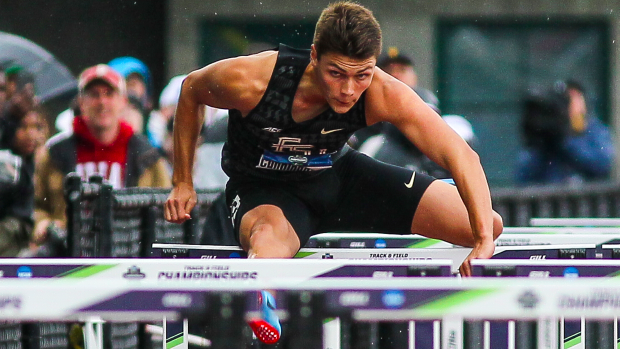 "I still feel like I'm basically a junior in high school again, behind all the guys who have been here before and trying to catch up," Cunningham said, "but I'm right there. I'm not too far off from them."

Competing against the nation's best, the Winfield, Ala. native navigated two rounds of qualifying to become just the third collegiate freshman to reach the finals of the USA Championships in more than two decades. Once there he proved he belonged, finishing in 13.71 - after a three-hour weather delay - behind four men, who between them own a world record, Olympic gold medal, eight NCAA hurdles titles and six USA championships.

Devon Allen and Grant Holloway, who reached the USA Championship finals at the conclusion of their 2014 and 2017 freshman season, respectively, finished 1-2. Jarrett Eaton was third, while Aries Merritt, the world record-holder and 2012 Olympic gold medalist, was fourth.

Cunningham was the next man across the line, capping a remarkable season representing the Seminoles with what he considers his greatest accomplishment.

"I expected to go to NCAAs both indoors and outdoors," he said. "I just didn't know well I would perform. Once I got to the NCAAs I was pretty sure I would make the final. This meet in particular I was very proud of the way I finished."

Entering the meet as the No. 12 seed on time from a field of 21, Cunningham wasn't supposed to be around for Sunday's final at Drake University.

"Mentally I was just trying to relax and focus on myself," he said. "I've been to competitions like this before with rounds. I know how to run rounds...

"The first round I felt kind of too relaxed. The time wasn't too good, but I made it through and that's all that mattered. The second round actually was a little chaotic, because I wasn't supposed to be in the final, but someone fell [Freddie Crittenden III] and I took that opportunity and got in and placed fifth in the final. It worked out pretty good."

On the nation's biggest stage, the young Seminole merely continued doing what he's done all year: compete with poise under pressure and rise to the occasion in the finals. He was the only freshman - male or female - to reach the finals in any event at the USA Championships.

"Trey is competitive beyond his years," FSU coach Bob Braman said. "You don't find freshmen who can handle three rounds of competition at this level. He handles it with a veteran's confidence and he simply doesn't get rattled. Fifth at the USA Championships is a world-class performance."

And quite a cap to a year which saw him earn a pair of first-team All-American honors, placing sixth at the NCAA Indoor Championships in the 60-meter hurdles and improving to fourth at the NCAA Outdoor Championships over 110-meters earlier this month. Along the way he won an ACC Indoor title, helped his FSU teammates to a pair of team championship and swept ACC Freshman of the Year honors indoors and outdoors.

Cunningham already ranks No. 4 all-time among Seminoles in both the 110- (13.57) and 60-meter hurdles (7.70), trailing only a trio who have either won NCAA titles or competed in the Olympics.

"It's hard to be surprised when you have somebody that talented, but the most pleasant surprise to me was how he handled adversity," said FSU Director of Sprints, Hurdles & Relays, Brandon Hon. "He came in like I wanted him to come in, expecting to win every race; not afraid of anybody and expecting great things of himself. But he still had to realize that it's not going to come easy." 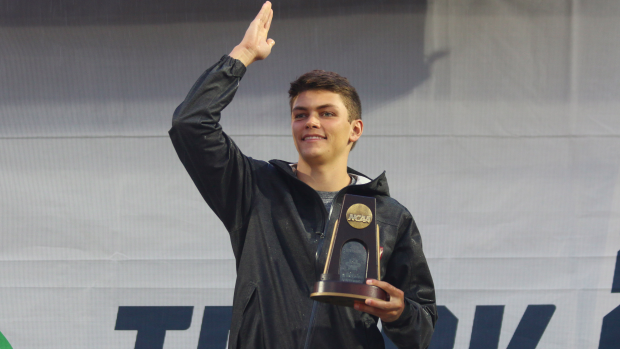 Despite the success, it didn't come easy; not even for the world junior record-holder in the 60-meter hurdles with 24 Alabama high school state titles to his credit. Though he did not lose a race as a senior, he arrived at FSU late last summer recovering from a serious hamstring injury. That led Hon to bring Cunningham along slowly with regard to conditioning, while he also adjusted to 42-inch hurdles at the new level.

"He's taken his lumps, after going undefeated and never tasting defeat as a senior in high school, to having to find his way at this level; realizing how challenging it is and how much you have to fight for every little thing," Hon said. "He did not get swallowed up in that. He kept fighting and stayed focused and never let the moment or the pressure get to big and kept rising to the occasion. That's always fun to see and you don't always see that out of a true freshman."

Cunningham's approach, and his demeanor, go a long way toward explaining his success, regardless the competition or the conditions.

"I've always said that my race will never change, only the speed of the race, because I'm always going to take eight steps to the first hurdle and three steps in between each hurdle," Cunningham said. "It doesn't matter if it's raining, snowing, sleeting or hailing, it's always going to be the same. I just know I can follow my pattern through all of it.

"You've just got to get the job done."

And while he has always had the ability to mask his emotions, especially when something negative happens, Cunningham's competitive fire burns bright internally.

That was evident with his performance down the stretch, after finishing third - as the clear favorite - at the ACC Outdoor Championships.

"That was my wake-up race," he said. "That told me to get my butt in gear, for sure. It happens. I was upset with how I ran, that was not a really good time for me."

Hon chalked it up to a bad race.

"But he expects himself, bad race or not, to still win," Hon said. "I like that about him."

Over his final three meets - NCAA East Preliminaries, NCAA Championships and USA Championships - Cunningham was the model of consistency and determination, repeatedly proving that he has a place among the best.

"I was fast enough to get to the big-boy meets," Cunningham said. "I was there with them, but they were just a little bit better than me at that point in time."

He also learned how important success is to his competitors; a point driven as he overheard several talking before Sunday's final.

"Running, for some of these people, is their life and it pays for whatever they need to do," he said. "I heard some of the professional guys talking about, if they won the meet they would get X-Y-Z amount of money, and that was a big deal to them...I also learned that anyone can come out of nowhere, because everyone at these meets has talent."

Though Cunningham will have to wait for his next opportunity to earn a spot on a US national team for the first time, he now has a better understanding of what it will take to get there.

"I'm not complaining that my season is over, but I would also like to have made that team and continue to run until August," Cunningham said. "We're going to take a nice long vacation, and then we're going to start back up running-wise in October, because we're planning on going to World Championships next year in Doha [Qatar]. Training-wise, we're going to up the intensity so maybe I can feel very confident that I will make the team once [USA] trials come around next year."

After seeing Cunningham through a healthy and productive freshman campaign, Hon is ready to help him take that next step.

"Now he's ready for the next level of progression in his training, which is going to be very intense; living on the edge a little bit," Hon said. "Now he's shown he's fit enough to handle that. He just needs to keep doing what he's doing and he'll see those big performances he's been looking for."

And what Cunningham did as a freshman with the Noles was pretty impressive for a guy who was "starting over."