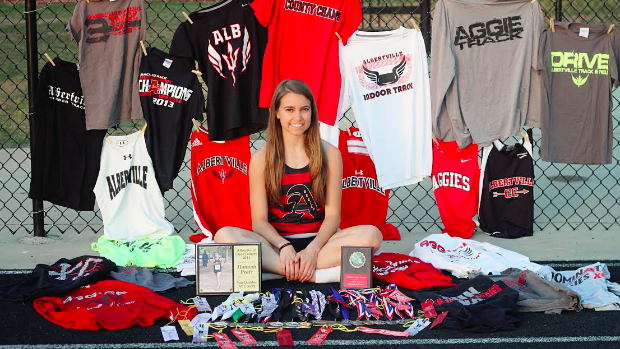 What was your most memorable meet and why?

Probably back in 8th grade when I was leading the 3200 meter race at the Albertville Aggies Invitational for 7 laps with no worries but then the last lap Zoe Evans from Randolph bridged up to me and both of us were going all out side-by-side for the last 200. She beat me by half of step but it was perfectly fine because that was the most fun yet competitive race I had ever experienced.

Where did you face your biggest competition?

I would have to say 8th grade sectionals before there was a 7A and Albertville became a 6A school, I was a tiny 8th grader going up against all of these big 6A schools I was terrified but ended up running some of the best times of my career.

Out of all of your high school accomplishments, which stands out the most and why?

Breaking school records that had been held for years. I know my school records will be broken in the future but it is a great feeling to say that I held those records for a long time!

If you could do it all over again, what would you change about your running career in high school? Honestly I wouldn't stress out so much, and I would've focused on just running for me.

What were the most difficult obstacles you had to overcome during your HS Track career?

INJURIES. Never had anything major but it was enough to hold me back some.

What will you miss the most?

The friendships I developed, not only with my teammates but also with my competitors who made racing fun.

Do you have any advice for younger athletes?

Do not stress yourself out so much just go out there and have fun while you still can. It's just a race, not a life or death situation. And as I have ALWAYS been told (would roll my eyes at my mom for saying this) but stay positive no matter how hard it gets. Positive in, Positive out.

What are your post-highschool or college plans?

I plan to attend to the University of Montevallo in the fall and run XC/track with them for the next 4 years. I'm so excited and can't wait!!!

Who would you like to say thank you to?

I would like to say thank you to my parents for always being there to support me throughout all 6 years of my running career. I know there were several times where they had to split up so they could watch both my brother and I compete in our sports but I'm extremely blessed to have such great parents who support not only me but also my entire team which they were basically the team parents for 6 years. Thank You Mom and Dad!!!!!