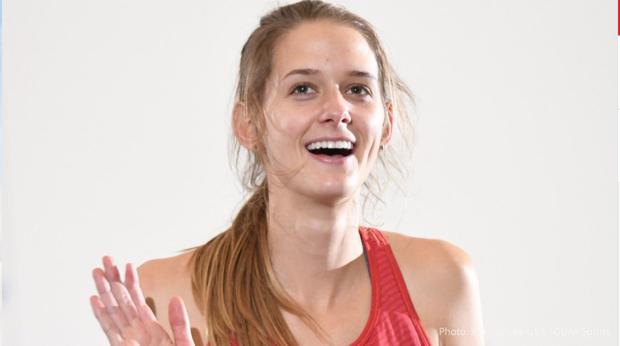 The first thing you should know about Karisa Nelson is that her favorite food is hot Cheetos.

"My mom used to call me Spicy Cheeto Butt," the 20-year-old says gleefully over the phone.

Nelson, the newly crowned NCAA indoor mile champion from Samford University, says she ate two bags as soon as she got home from the championship at Texas A&M this past weekend. The team is off this week for spring break, and she gets to enjoy three days completely free before easing in to some light jogging.

"I've been eating as much as possible," she says. "I told my coach I was gonna see how much weight I could gain in three days."

That's not a typical "out of the mouths of distance runners" comment. But Nelson is anything but typical. Her win in College Station, Texas, marks the first-ever NCAA title for a Samford athlete, not only in track and field but in any sport.

In the mixed zone after the race, at least one member of the media asked, "Is she foreign?

She's not. Nelson's a graduate of T.K. Miller High in Brewton, AL, a town of 5,408 people that is known for hosting the popular Alabama Blueberry Festival every June.

"I don't know if she knows everything about every other athlete in the country, and I think there's strength in that ignorance," says first-year Samford distance coach Pat McGregor. "She just wants to go out and compete and have a good time.

"I think the smartest move she made in that mile was, she didn't wait on Kaela Edwards. I mean, this is the defending champion, the collegiate record-holder in the 1K. But when Purrier took the lead [at 1200m], she was trying to run away from everyone and it was a hard move, I was impressed with it. I thought Karisa did the right thing and immediately went around Kaela Edwards and got on the leader. She didn't worry about who Kaela Edwards was; she was there to get on the lead."

Her coach at the time, Kevin Ondrasek, now at Oklahoma, shifted the goal from making the regional meet to heading to nationals.

"During those races I knew I hadn't given everything, and I won them both," Nelson says. "I ran 4:15 at regionals, and that's when I knew, that's everything I had. I was like, 'I don't know how I'm gonna get faster at nationals!'"

She watched from the sidelines at Hayward Field in Eugene, Oregon, as 4:15 was worth just ninth place in Heat 1 of the 1500 prelims.

Instead, she psyched herself out and ran just 4:22, failing to advance. She says now that her goals were simply limited. Nelson hadn't realistically thought beyond just qualifying to compete in Eugene.

It was an incredible feeling to race at Historic Hayward Field. Next time will be even better.

"I got there and was like, 'I have to run two more races? What? I just want to go on vacation to Italy with my boyfriend,'" she says. "I know it's really bad to say, but that's how it was."

Maybe the romantic Italian vacation was distracting last year. But Nelson credits part of her breakthrough on the track to her boyfriend, fellow Samford runner Arséne Guillorel.

When Guillorel, who earned second-team All-American honors in the 5K last spring with a 13:53, 12th-place finish, shared his ambitions of becoming a professional runner, Nelson realized she wanted the same thing.

"This was last February, before I started running fast," she says. "I was a 4:49/4:28 girl. He said, you really have a short amount of time to be at your peak performance, only 10 years. I want to have great achievements, and if I want to do it on the track, I have to do it now.

The image is a far cry from her freshman year, when the self-described "sheltered" teenager quickly got turned on to Birmingham's late-night party scene. She struggled to keep up with workouts and wasn't tuned in to her training.

"I was that kid who just showed up to practice," she says now of her first year on campus. "But I just realized… I felt bad, I felt like I wasn't giving everything I had to Samford and my teammates. When I was out with those people and listening to conversations, I was like, 'Why am I here? This is so dumb.' About halfway through freshman year, I was like, 'I don't want to do this anymore. When I get home [after a night out], I feel terrible, and when I'm running, I feel good.'"

In the years since, Nelson has run under three different coaches. But she doesn't express the disgruntled resentment one might expect from an athlete who's undergone that many coaching changes.

In her post-race interview on Saturday, she said that each of her coaches have been there when she needed something different.

"My freshman year, coach [Lori] Strand taught me forgiveness and that you still have hope even if you mess up," Nelson said. "I had a bad phase freshman year, I didn't make a lot of healthy decisions and I didn't think about running a lot. I might have been kicked off if Coach Ondrasek had been there then. Coach O helped me get back on my feet after my rough freshman year and got me on the national level. He had a really structured program, which was really nice.

"I remember when he left, I just cried my eyes out. I was freaking out and talked to [Samford head coach Rod Tiffin], who had always been there for me, and he said, 'Karisa, it's OK. I'm gonna do my best to find the best coach I can.'"
Finding a connection
Enter the 26-year-old McGregor, whose position at Samford is his first-ever coaching job. The Alabama native was a seven-time state champion at Hoover High School and trained under John Hays at the University of Texas, where he was a two-time second-team All-American at 1500m and Frank Gagliano at the NJ-NY Track Club.
"I don't want to give myself anymore credit than I deserve," he says of Nelson's historic win. "My job was to get her as healthy and fit as possible to the meet. What she did was very, very hard, and I happened to get here at the right time."

The sandy-haired McGregor can still pass for a college athlete and has no problem hitting the track to run with the squad. On the new coach's first day with the Bulldogs, Nelson remembers wondering "who is this" as the backward-hat-clad newcomer turned red in the face while demonstrating every core exercise written on a piece of notebook paper.

McGregor recalls one workout where the athletes were supposed to wear their spikes. Everyone is required to keep their spikes in their locker for easy access, but on this particular day, Nelson did not have hers.

"I had told them this. Keep your spikes in your locker," he recalls. "If you need them, we can grab them. Better to have them and not need them, than need them and not have them. She didn't have them. I said, 'go get them.' She got mad, and had to run back to her apartment about a mile away. She comes back, and she says 'OK, I got them.' And I said, 'Go put 'em in your locker.' We ran the workout in her flats, and she didn't use 'em. She was pissed at me.

"I don't want to come off as sanctimonious. I'm late. I'm lazy. But I try my best to do the right thing. And I really want to hold her to a higher standard and I know in the end, it will be the best thing for her. Her margin for error is so small in the big-time races that she has to be able to do the little things right." 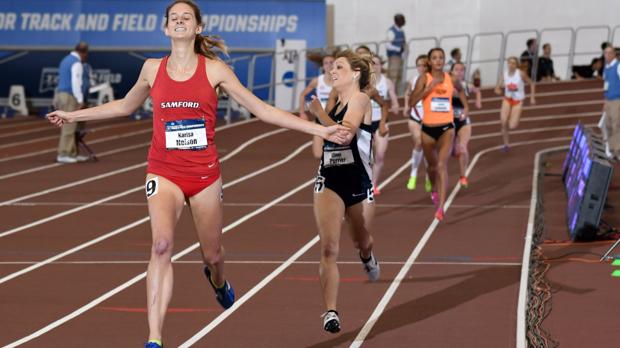 Before Saturday's final, McGregor's only instructions to Nelson were "You have to be there with 200m to go."

She was. At the bell, it was Purrier and Nelson; the woman who would become Samford's first-ever national champion cruised 30.84 for the fastest final 200m of the field and crossed the line in 4:31.24. Purrier would take second, Rivers third, defending champion Edwards fourth.

"When I first crossed the line, I just thought very matter-of-factly, 'Huh. I won. I did it. Good job,'" she says. "And then I looked around to the reporters and thought, 'Oh my gosh. Is this my life?' I felt like I was living a movie.

"Samford is such a great program, and I wanted to show everyone what it did for me as an athlete. You don't have to go to a huge name school to be a national champion. You just have to be motivated and have good coaches."