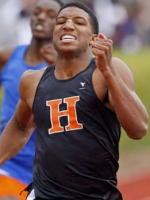 Sort By:
Filter By:

22 First Round NFL Draft Picks Ran Track In High School
Out of the 32 first round NFL draft picks, 22 participated in track and field during their high school careers. ...

Top 25 Most Popular Boys Athletes on MileSplit from Pas...
We took a look at who who were the most popular male high school track & field athletes this past year on MileSplit across the nation. See who made up the the top 25 most popular and viewed high sc...

MileSplit US Top 25 National Indoor T&F Boys Rankings (...
A list of the top 25 indoor track & field boys performances nationally according to results and performances entered in the MileSplit database as of January 7th. Email any updates, mistakes, correctio...