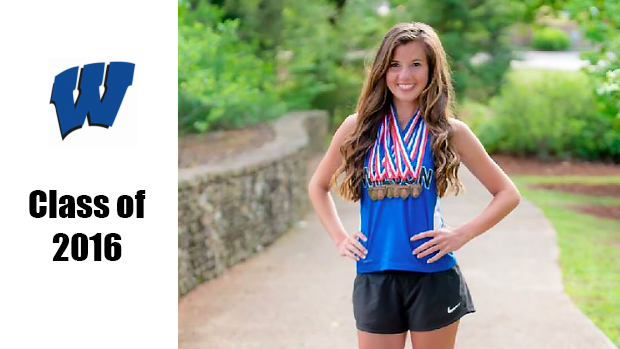 -What was your most memorable meet & why?

The 2016 State Track Meet was by far my most memorable. There was a LOT of pressure on our 4x800m team this season.  Standing on the starting line in our final 4x800m and being the 2 x State Champions/Record Holders, I definitely felt a little overwhelmed going into the race. Right before the gun went off, I remember looking at Cele and asking her "We can do this, right...?", because I was so, so nervous.  Once the gun went off, I calmed myself down by singing rap songs (out loud ) that my teammates & I would sing before races (Yes, it really works). I smiled nearly the entire time & enjoyed the moment. Once we finished, we didn't find out until 5 minutes later that we had actually broken our state record (the timer wasn't dual sided) of 9:55.80 by over 10 seconds (9:44.09)!! I also set PR's in all 4 of my events, so that was pretty cool!

-Where did you face your biggest competition?

This is really tough...I would say I faced my biggest competition at the 2015 & 2016 State Track Meet. I feel like I became more competitive at the state level in 2015 and that carried into my 2016 Outdoor Season.

-Out of all your high school accomplishments, which ones stand out the most & why?

I would definitely have to say my biggest accomplishments in my high school career were winning the 4A XC State Championship back-to-back, setting the state record/breaking our own record in the 4x800m, becoming 3x state champions in the 4x800m, and being the first person in my school's history to qualify for state 6 years in a row. Every one of these accomplishments took an enormous amount of work to achieve. Winning the 4A State Championship in 2014 really changed a lot for our team. Coming from a school where running wasn't one of the main sports, many people were in shock that a small school in the middle of nowhere could be so competitive on big stages.

-If you could do it all over again, what would you change about your running career in high school?

The only thing I would change about my high school running career is that I would have went back and put in a lot more effort and ran harder workouts. This past year I did a little bit better on pushing myself and had to do two-a-day's for most of the season because I had so much energy. I don't think I am anywhere near my potential quite yet, so hopefully I'll find out just how fast I can go in college.

-What were the most difficult obstacles you had to overcome?

Two of my most serious obstacles were fracturing my back in 10th grade and running with a stress fracture my entire senior cross country season. Fracturing my back was the most serious because it triggered my right leg to frequently go numb when I run. Also, I struggled mentally throughout my high school career with not thinking I was good enough and doubting myself a lot. I had major issues with being positive knowing I had to nearly start all over after my injuries. I'm beyond thankful for such amazing family, friends, and coaches who helped me tremendously throughout these times and helped me get back on track (literally).

-What will you miss the most?

My team and coaches have made my high school career the best I honestly could ever ask for. If you've seen Wilson HS at any meets, you probably have seen us do some reallyyy weird stuff. I think I'll miss making new memories with my team more than anything. I looked forward to practice because they always brightened my day and made me laugh. The past few years I've gotten extremely close to the girls on the team, so not running with them every day will be a little hard for me.

-Do you have any advice for younger athletes?

WORK HARD & HAVE FUN!! Never lose the enjoyment that comes with running. It's a true blessing to be able to run, so never take that for granted. If you want to make a difference, you have to work harder/smarter than all of your competitors. Also, never underestimate yourself. I almost quit running entirely a few years ago because I had my mind set on it being impossible to run fast again after I fractured my back. I'm very thankful my amazing parents picked me back up and never gave up on me.

-What are your post-high school or college plans?

I will be attending the University of Montevallo on a track and cross country scholarship. There, I will pursue a degree in Biochemistry. After graduating, I plan to attend medical school in hopes of becoming a surgeon.

-Who would you like to say thank you to?

I would like to say a HUGE thank you to God, my family, coaches, and friends/teammates. They've been my foundation the past few years and I couldn't be any more thankful for each & every one of them. I'm blessed to have the opportunity to run with such amazing people & under two of the best coaches in the entire state. A huge thank you to Coach Philips & Coach Finley for your guidance over the years and never giving up on me, even when I got really down on myself. Thank you to Beki Moon for being a 2nd mom to me over the past 6 years and never failing to be there for me and my family.  Thank you to my outstanding parents for pushing me to be a better person/athlete, driving me to the track at 5AM nearly every day from 7th to 9th grade, and being there for me 24/7. P.S. A special thank you to Tim Loreman for having such a large impact on my running career. We can't thank you enough for all you do & your dedication to us, it really means the world.